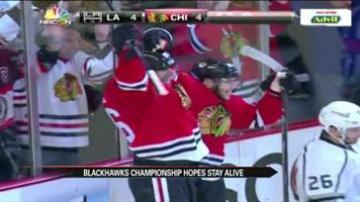 Michael Handzus scored in the second over-time pushing the Blackhawks past the Kings five to four.

This win cuts the Kings' series lead to 3 to 2.

After the game Patrick Kane told the press he expects nothing less.

"He's a warrior. He comes to play every night and does whatever he can to be in the lineup whether he's injured or not," said Kane.

Game six gets underway Friday at six in Los Angeles.