Blue and gold game missing a key aspect this weekend 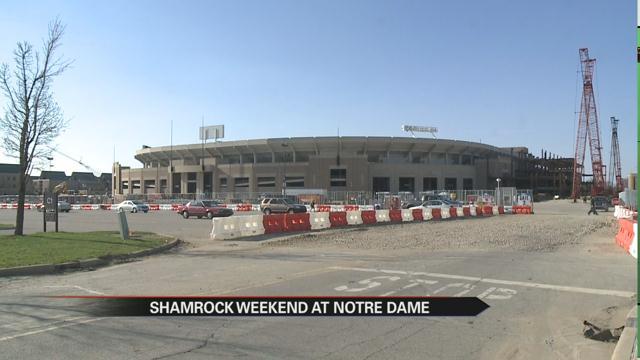 Thousands of folks are already invading the campus of Notre Dame for Shamrock weekend.

It is a weekend designed to celebrate Irish athletics, but one event is noticeably missing from the schedule. The Blue and Gold game is invitation only this year.

The game is at the practice field because of the major construction at Notre Dame Stadium, leaving fans without a place to watch the weekend's biggest attraction.

“What a waste of a beautiful, beautiful weekend we have here in South Bend, right?” said Bill Farrington, an alum of the university.

A blue sky and gold rays of sun are welcoming fans to campus this weekend, but it is the gleaming green field that is missing from the equation.

“It is really unfortunate that a beautiful weekend we can't all be in the stadium,” said Farrington.

The Blue and Gold Game has been moved to LaBar practice field, with an invite only list of attendees.

The university hopes that fans can forgive the mess they have made in Rockne's house.

“It's a small sacrifice I suppose to give up the Blue and Gold Game so that we can have that beautiful venue in the future,” said Farrington.

He is a 1986 graduate of the university.

Farrington is back at his alma mater for an alumni conference.

He believes one man is responsible for a lot of these campus improvements.

“Taking it from a small, relatively unknown school in the Midwest, and really thrusting it into the education forefront worldwide,” said Farrington.

He is talking about Father Ted Hesburgh.

Farrington was not able to attend Father Ted's funeral, so he is taking the opportunity to mourn in front of Father Hesburgh's newly installed headstone.

“Having the chance to come out and pay my respects means the world to me,” said Farrington.

He says Father Ted's legacy challenges him to be the best he can be, that is why he has such an optimistic view on life, and the changes on campus.

“The Crossroads project that we're doing is going to be an amazing addition to the university,” said Farrington.