Board votes to end teacher's contract 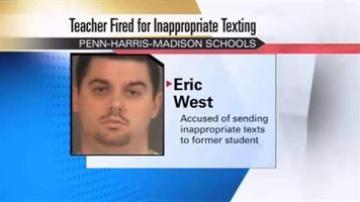 MISHAWAKA, Ind. -- The elementary school teacher accused of sending inappropriate texts to a former student is now out of a job.

The Penn-Harris-Madison School Board unanimously voted to end Eric West's contract with the school system.

Police charged West with sending sexually charged texts to a 12-year-old girl and former student. His next hearing is Nov. 28.