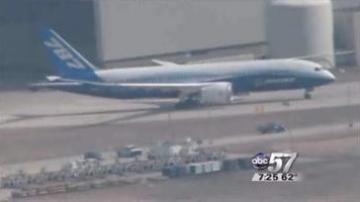 CHICAGO, Ill.-- For the first time, Boeing's brought it's new aircraft to its hometown.

Chicago based Boring flew the 787 Dreamliner into O'Hare International Wednesday morning, where it picked up a few special passengers.

The plane is in the middle of a tour, and stopped for a little while in Chicago before heading to Mexico City.

Chicago based United Airlines is scheduled to be the first U.S. carrier to fly the 787, later this year.