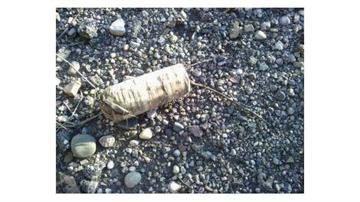 ELKHART, Ind. -- The Elkhart County Sheriff's Department was called to investigate a suspicious item found near a business on Woodlawn Avenue.

Tuesday morning, companies near the Adams and Woodlawn intersection in Elkhart were idle as the Elkhart City Bomb Unit checked out a suspicious item.

"They shut down the street, told all of us that we could not come out front," said Michael Filbert of Smartt Innovations.

Sierra and one of his coworkers discovered the suspicious item while cleaning out a ditch that borders the company's fence.

"I picked it up and when I lifted it up, it had a wick sticking out of it. It looked like a small pipe bomb and it was real heavy- like 2 pounds. It took me a minute and then I just dropped it and I stepped back," said Sierra.

His coworker snapped a picture and Sierra called -9-1-1.

When police arrived, they moved in to get a closer look.

"Nobody wanted to pick it up they all thought it was a bomb too- I wasn't the only one," said Sierra.

"They had the robot come down and look at it and see what it is," said Filbert.

"I think it was just a fire cracker," said Sierra.

"It almost looked like the inside of a toilet paper roll," said Filbert.

Workers agreed it was better to be safe than sorry.

"You don't know what's inside of it, it could be nails it's hard telling," said Sierra.

If you have any information about the firework, contact the Elkhart County Sheriff's Department at 574-533-4151.