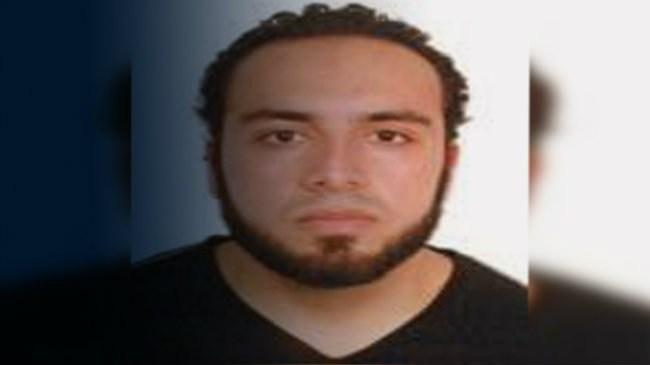 (CNN) -- Ahmad Khan Rahimi, who was wounded in a shootout with police last month after allegedly setting off bombs in New York and New Jersey, pleaded not guilty Thursday to weapons and attempted murder charges.

Rahimi, 28, was arraigned in a New Jersey courtroom via teleconference from a hospital bed where he has been recovering from wounds suffered in the gunbattle.

Public defender Peter Liguori, standing at his client's bedside, opened the hearing by telling state Judge Regina Caulfield that the defendant asked his name be corrected to Rahimi. The suspect's last name had been previously released by authorities as Rahami.

Liguori entered the not guilty plea to New Jersey charges on behalf of his bed-ridden client, who only answered "yes" in a barely audible voice in response to a number of questions from the judge.

Rahimi is charged with five counts of attempted murder of a law enforcement officer stemming from the Linden incident.

In addition, Rahimi was charged in federal court with four counts: use of weapons of mass destruction, bombing a public place, destruction of property and use of a destructive device. Those allegations were not part of Thursday's proceedings.

Authorities said Rahimi detonated bombs the morning of September 17 near the start of a Marine Corps charity run in Seaside Park, New Jersey, and that night in New York's Chelsea neighborhood. An unexploded pressure cooker bomb was found several blocks away from the site of the Chelsea blast.

Nobody was hurt in the first blast, but the explosion in Chelsea injured 29 people.

The night of September 18, a backpack with five bombs inside was found in a wastebasket outside near a rail station in Elizabeth, New Jersey, about 16 miles from New York City.

A regionwide manhunt was launched and Rahimi was arrested the morning of September 19 after the shootout with police in Linden. Two officers were wounded.

The defendant is a US citizen who was born in Afghanistan and had visited the Mideast several times in recent years, authorities said.

Rahimi first came to the United States in 1995 and became a naturalized citizen in 2011. He had been living with his family in New Jersey.

Complaints filed in federal court in Manhattan and New Jersey contain details from the investigation and Rahimi's handwritten journal, which was damaged in the police shootout.

The federal complaint describes how he came to Manhattan about two hours before the first blast on West 23rd Street in Chelsea, but does not explain a three-hour gap from then to when he is believed to have left the city via the Lincoln Tunnel at approximately 11:30 p.m., around the same time the New York Police Department and New York mayor held their first news conference regarding the incidents.

Rahimi was captured after the owner of a bar in Linden found him sleeping in the doorway of his bar. Harinder Bains, owner of Merdie's Tavern, said he was watching CNN on his laptop from another business across the street. At first, he thought he was some "drunk guy" resting in the vestibule. Then, he recognized Rahimi and called police.