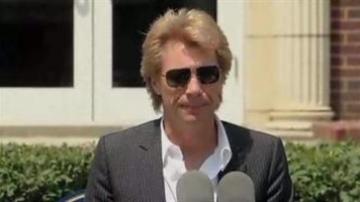 NEW JERSEY — Jon Bon Jovi returned to his roots on Monday, armed with a check for $1 million. He donated the money to benefit the state's Sandy Relief fund.

The rocker is an honorary board member for the organization.

It has has raised more than $38 million since the disaster.

Bon Jovi visited the area after Sandy hit in October 2012. And he toured again with Governor Chris Christie before the announcement was made.