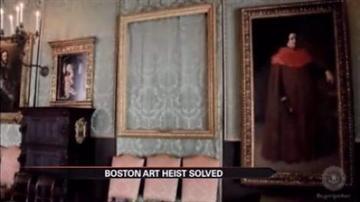 BOSTON -- The FBI says they have solved one of the most famous art heists in recent history.

Twenty-three-years-ago someone stole half a billion dollars worth of art work from the Isabella Stewart Gardner Museum in Boston.

Now the FBI says they know who is responsible.

New evidence shows who did it but the FBI refuses to release the names. Now the art museum is throwing a little cash at anyone who can help.

"The Isabella Stewart Gardner Museum is offering a reward of $5 million for info leading to all of our art in good condition," said Anthony Amore, museum chief of security.

Since the heist took place 23-years ago, those responsible will not face any charges.

The art museum believes some of the artwork could be in Connecticut and Philadelphia.