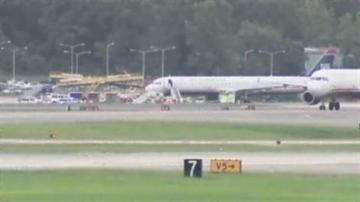 A bomb threat was reported on a plane before it even left the tarmac.

Authorities said someone called in a bomb threat targeting a U.S. Airways flight from Boston.

Officials removed the passengers and took them to the terminal for re-screening.

Emergency vehicles rushed to the airport as a precaution.

Passengers were on edge because of the threat and its possible connection to the tragedy at the Boston Marathon.

The FBI says it did not appear that the passengers were ever in danger.