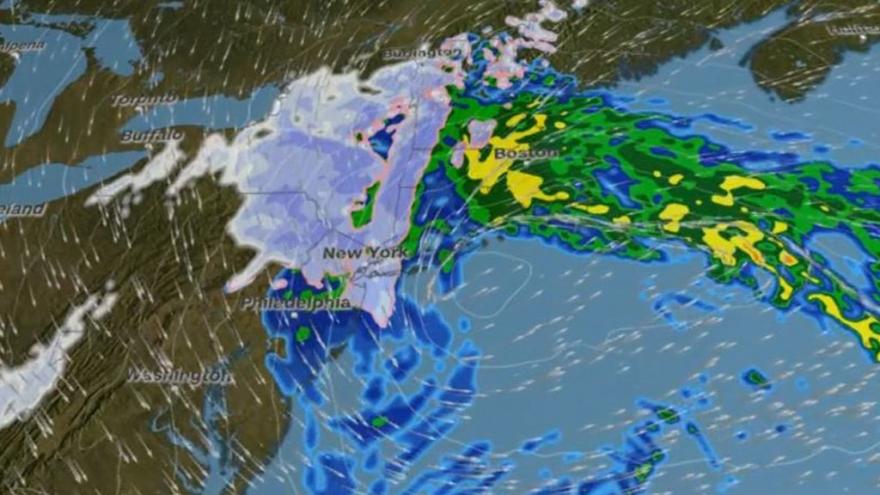 (CNN) -- For the second time in two months, the people of Boston are putting on their high waders.

Only twice in the last century has a high tide in Boston Harbor topped 15 feet -- during the blizzard of 1978 and January 4, during a savage storm that sent water sloshing through the streets of Beantown.

But thanks to the nor'easter that's wreaking havoc on the East Coast, the city may suffer through near-record -- or maybe even record -- high tide levels over the next two tide cycles that will occur before midnight Friday and late Saturday morning.

A scary high tide happened late Friday morning but it only reached 14.67 feet -- close but not a record-breaker.

Still, water filled streets in East Boston and nearby towns.

Many streets were closed and the city government advised people not to drive or walk in high water. Kayakers paddled down thoroughfares normally filled with cars and bikes.

Businesses owners piled sandbags in front of their stores to keep the water out. The Boston Aquarium was closed to visitors. Boston public schools held classes on Friday but called off all after-school activities.

In the Boston suburb of Quincy, national guardsmen and other rescuers saved about 50 people, plus some of their pets. The residents were carried to safety in rafts and the scoopers of front-end loaders, CNN affiliate WBZ reported.

"In my garage, it was all the way up to my waist," Wayne Adams told WBZ.

"Many of my neighbors' houses are flooded and some of them destroyed with foundations that collapsed," he said. Eye said police were leading evacuation efforts.

So far, no fatalities have been reported in Massachusetts. Winds have reached 60 mph and there's a chance the heavy rain could turn into snow.

Amtrak canceled service between Boston and Washington, DC, Friday afternoon due to the storm, according to a tweet from the company.

"Despite our best effort to restore service between BOS and WAS today, we have determined at this time it is not safe to do so,"Amtrak said. "Hazardous conditions for our customers & crews have led us to cancel all Amtrak service in the Northeast Corridor until tomorrow. We sincerely apologize."

"We cannot stress enough: this storm is shaping up to be more severe than the storm on 1/4," he said in a tweet. "If you live in an area that is told to evacuate, we strongly encourage you do so first thing Friday AM. Staying in homes that are in flood prone areas puts you & first responders at risk."

The storm is moving slowly, and the wind, rain and flood effects will linger for days.

"Mostly minor and some moderate flooding is expected in southern New England and New York on Friday and Saturday," the National Weather Service said.