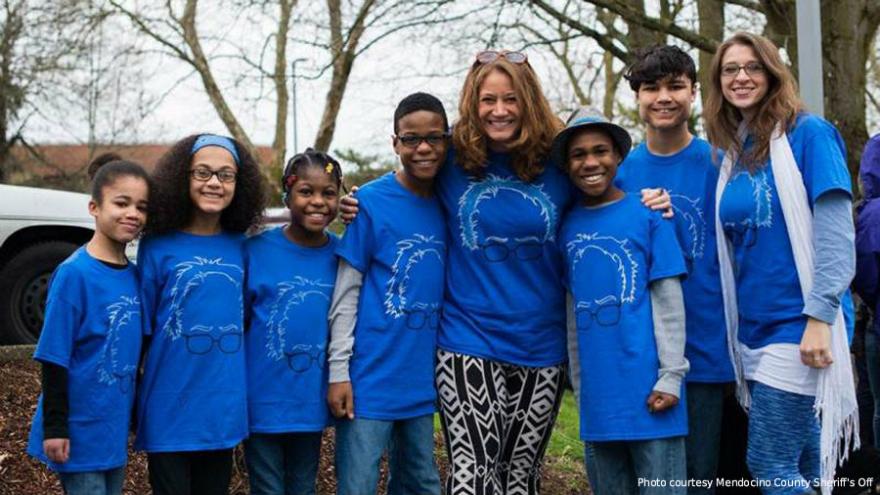 (CNN) -- A Washington family was killed after their SUV plunged 100 feet off a coastal highway in California, landing on its roof in the Pacific Ocean, officials said Wednesday.

The bodies of Jennifer and Sarah Hart and three of their six children were found Monday in and around the vehicle, Mendocino County Sheriff Tom Allman said. Their three other children are missing.

Among the missing children is 15-year-old Devonte, who made national headlines in 2014 when he appeared in a photo taken during a Ferguson-related protest in Portland, Oregon. The photo, which went viral, shows a tearful Devonte hugging a police officer.

The California Highway Patrol received 911 calls Monday about a vehicle that went over the side of Highway 1 in a remote section of Mendocino County, about 180 miles north of San Francisco, Sgt. Erich Paarsch told reporters Wednesday. A passerby happened to see the SUV at the bottom of the cliff.

Emergency responders found the vehicle on its roof with the two women, both 38, inside the car, Paarsch said. Outside the car, they found the bodies of Markis Hart, 19, and Jeremiah Hart and Abigail Hart, both 14.

Investigators are still looking for the bodies of Devonte and his sisters Hannah, 16, and Sierra, 12. The sheriff's office is working with the Coast Guard to search for the children.

The family was from Woodland, Washington.

On Friday, the state's Child Protective Services had attempted to visit the family after the "now deceased children were identified as potential victims of alleged abuse or neglect," according to a statement from the Washington State Department of Social and Health Services.

CPS attempted to make contact with the family three times, on Friday, Monday and Tuesday, but weren't able to reach them.

"We have not made any findings in this investigation and we had no prior history with this family. We are working with all involved law enforcement agencies on their respective investigations," the department stated.

Allman pleaded with the public for any information about the family's whereabouts 24 hours before the crash.

The famous photo of Devonte from 2014 showed him with tears streaming down his face as he embraced a white police officer in the middle of a demonstration over the police shooting in Ferguson, Missouri.

He was holding a sign offering "free hugs" when Portland police Sgt. Bret Barnum approached and extended his hand because he saw Devonte crying. Barnum said the two talked about life, travel and summer vacations before he asked Devonte for a hug.

The sheriff Wednesday said there is every indication that all six children were in the SUV, though he said there is a possibility the three missing children could have been left with friends.

A complicating factor is that investigators don't know when the SUV plunged over the cliff, the sheriff said. The vehicle was in the water for at least several hours before it was discovered, he said, based on the water found inside the SUV and in the wheel well.

The vehicle had to travel about 75 to 100 feet on a dirt "turn-out" next to the highway before it went off the edge, he said. The turn-out is a place where cars and motor homes can park and people can walk their dogs. There is a dirt berm at the spot but no guardrail.

There were no skid or brake marks, Allman said. It's not clear whether the SUV might have rolled or launched over the edge, CHP Sgt. Christopher Dalin said.

The local sheriff's office in Clark County searched the home and said it appeared the family may have been on a temporary trip because there were many belongings inside, along with a pet and some chickens.