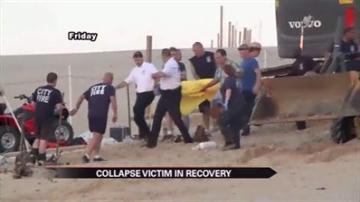 CHICAGO -- Friday, Nathan Woessner fell into a hole below a sand dune at the Indiana Dunes and was trapped for several hours. He has been in intensive care since the accident and doctors said he is progressing and making improvements every day.

Family members believe his rescue and recovery are truly a miracle.

“When they found Nathan he was cold and lifeless and the coroner was there, but when they picked him up he had a cut on his face and it started to bleed and they said he's got a heartbeat,” said Pastor Don Reul, Nathan’s grandfather.

Doctors have given the family hope that 6-year-old Nathan will recover fully from the incident.

"In the bible I read about miracles but this one came home to us,” said Reul.

Reul was on a trip in upstate New York when Nathan and his family were vacationing at the Indiana Dunes on Friday.

"They decided to go on top of Mount Baldy up there to look around, do the things you do at the dunes,” said Reul.

Reul said his son-in-law and another friend were up ahead of Nathan and another 8-year old boy when Nathan disappeared.

They tried to dig with their hands to rescue the boy. They made it 4 to 5 feet deep but there was still no sign of Nathan.

Hours later, ABC57 was there as heavy machinery and the rescue crew pulled Nathan free.

He was rushed to Saint Anthony's Hospital in Michigan City, then flown to University of Chicago Medicine.

"We needed to continue to look at his lungs. We've been doing daily bronchoscopes to try to get the sand out,” said Dr. Tracy Koogler of the University of Chicago Medicine.

Koogler says they’re most concerned about the injuries to his lungs.

She compared his condition to a patient with moderate pneumonia.

The hope is that six months down the road Nathan can return to being a normal kid.

“Riding a bicycle doing what a normal 6-7 year old does,” said Koogler.

The doctor says they hope to have Nathan's breathing tube out by the end of the week.