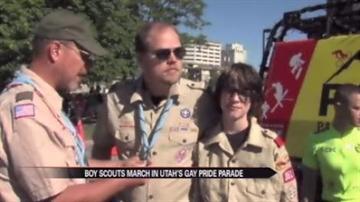 SALT LAKE CITY  -- A gay pride parade in Utah had a new group marching in it.

A group of Boy Scouts were invited to march in Salt Lake City's gay pride parade.

This comes a week after the Boy Scouts of America approved gay youth to join the scouts.

Members, volunteers, and gay pride organizers wore the scout uniforms as they proudly marched in the parade.

"This is not advocacy unless marching in the Columbus Day Parade is advocacy for Italians," said Dave McGrath. "We are advocating as Boy Scouts with in Boy Scouts to live their Scout Law."

The scouts could face some trouble for wearing their uniforms during the parade.