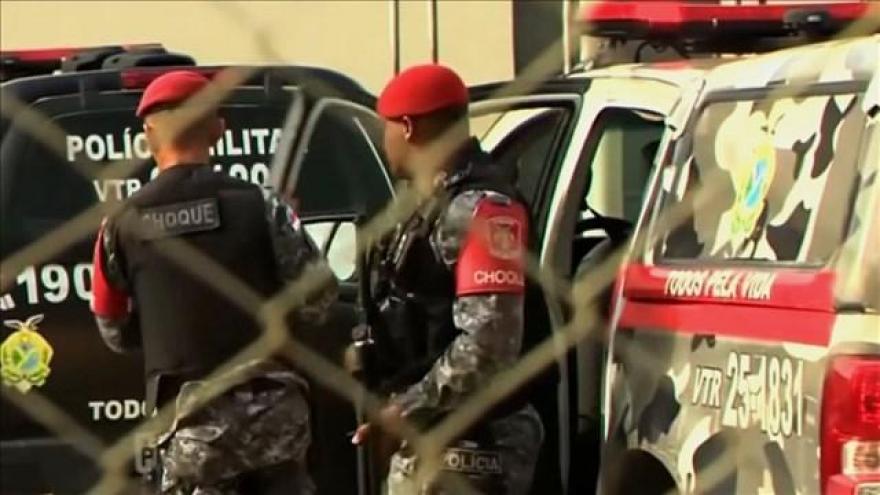 RIO DE JANEIRO (CNN) -- The head of the Brazilian jail where 56 inmates were killed during a riot on New Year's Day has been removed from office, state-run media agency Agencia Brasil reported.

Agencia Brasil reports the two inmates alleged prison officials received money from criminal gangs to allow the entry of weapons, drugs and cell phones into the jail. The inmates also allege that administrators facilitated the escape of prisoners.

Silva will be off the job indefinitely while authorities investigate the claims.

The first riot of the year erupted at the Anisio Jobim Prison Complex (Compaj) in the city of Manaus, between incarcerated members of the the Familia do Norte (FDN) and the Primeiro Comando da Capital (PCC) groups. The riot lasted for more than 17 hours and left 56 dead. The macabre nature of some of the deaths was alarming; some of the prisoners were decapitated, with their bodies tossed over the prison gates while others were incinerated in their sleep.

Sergio Fontes, the public safety secretary for the state of Amazonas, said that the riot started over control of the drug trade behind the prison walls.

"There is a drug route in the northern border with Peru that is being used by traffickers to bring, mostly cocaine, into the country," Paulo Storani, a security expert and former Rio de Janeiro Elite squad military officer, told CNN. "The simplest way for one group to control it is by eliminating the other group."

Storani believes the prisoners had access to cell phones and weapons, which may have been smuggled in by family members or lawyers visiting the inmates.

"Many of these gangs were born within Brazilian prisons in the late '70s and early '80s, so they know how to operate inside the prison walls," Storani said. "The Brazilian penitentiary system has not found a way to control the entry of cell phones, which allows many leaders to turn the prisons into their personal offices."

Authorities in Manaus are also investigating-- and still trying to catch inmates-- after a prison break at the nearby Instituto Penal Antônio Trindade (IPAT).

Agencia Brasil reports that hours after the riot at Compaj and the prison break at IPAT were quelled, on the other side of town, four inmates were killed at the Prison Unit of Puraquequara (UPP).

Later in the week, in the neighboring state of Roraima, 33 inmates died at the Agricultural Penitentiary of Monte Cristo. Many of them were also beheaded.

Back in Manaus, a few days later, four people died during a riot at the Desembargador Raimundo Vidal Pessoa public jail in the northern part of the country. Three inmates were decapitated and one was asphyxiated. The jail, which was shut down in October because of improper conditions, was reopened to receive inmates after uprisings throughout the state. Nearly 300 prisoners had been transferred to the jail.

Following the New Year's uprising in Manaus, Pope Francis invited attendees of his weekly Vatican audience to pray for the relatives and victims of the riot, saying he was "pained and concerned" by what happened.

"I renew my appeal that prisons should be places of reeducation and reintegration into the community, and the conditions for prisoners should be fitting for human persons," he said.

These comments came three days after the riot, before any reaction from Brazilian President Michel Temer, which angered Brazilian human rights groups.

Within hours of the Pope's statements, Temer called the riots a "horrific accident." Days later, he and Justice Minister Alexandre de Moraes announced the creation of a new National Security Plan.

Overcrowding is one of the main problems in Brazilian jails.

Brazil has the fourth largest prison population in the world, with more than 622,000 people behind bars, according to its justice ministry. That puts it behind the United States, Russia and China.

Days after the deadly riots throughout the country, President Temer acknowledged that more jails needed to be built so that jails that accommodate 500 inmates don't have to hold upwards of 1, 200.

"I hope that 20 years from now, whoever stands behind this podium, comes and says they are only building schools or hospitals, and not penitentiaries. But reality is that our current situation leads us to build more penitentiaries."

Temer has vowed to continue working on improving the state of the federal prison system and said he expects to approve the building of 25 new units.

His new security plan also includes proposals for bringing technology like metal detectors and cell phone blockers to some of the prisons.

Amnesty International's Human Rights adviser Renata Neder believes the plan is "too broad" and says conditions in many of the country's prisons are inhumane.

Data from Amnesty shows that the Manaus jail Compaj currently holds over 1,200 prisoners while only having capacity for 770. Amnesty reports that the Monte Cristo prison also is overcrowded, holding over 1,400 prisoners when it should be home to no more than 700.

"Many of the people who are behind bars right now are not the rapists or murderers. They are people who were arrested on minor charges and are still awaiting convictions," Neder told CNN.

Moraes, the justice minister, acknowledged this issue during a recent press conference and said he's working with states to reduce the number of "temporary prisoners," which includes those awaiting trial and those who have not yet been convicted.

Nearly 50% of prisoners in Brazil's prison system are considered to fall under this category. Moraes says he's hoping to reduce that number to 18% under the new plan.

"We need a more rational prison system in Brazil. Our current system, by no fault of anyone specifically, arrests many people but not always the right people," Moraes said. "We have a lot of prisoners who should not be in jail."

Organizations like Amnesty have also called on states to ensure prisoners are receiving water and proper meals as well as providing proper access to health care.

Seven states have requested help from the Brazilian Ministry of Justice.

On Tuesday, 100 National Force soldiers arrived in Manaus and 100 more in Roraima's capital, Boa Vista. The men will support state officers in policing and overall support around the perimeter of penitentiaries.

In Manaus, the federal government is also deploying ten federal prison guards, a multidisciplinary team to assist in the administration of prisons, and a helicopter to aid with the search of escaped inmates following a request by Amazonas state Gov. Jose Melo.