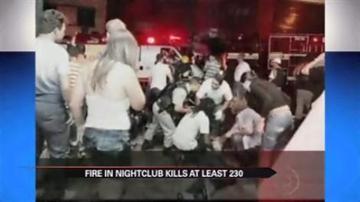 SANTA MARIA, Brazil. -- The country of Brazil is horrified after a deadly fire killed over 200 people and injured hundreds more.

ABC News reported that at least 230 people were killed after a fire broke out at a night club in Santa maria. The fire apparently started by a stage effect that was part of the entertainment.

Band members onstage reportedly lit flares, which set the ceiling on fire. Hundred were killed, most reportedly from asphyxiation.

This is the deadliest nightclub fire in more than a decade.