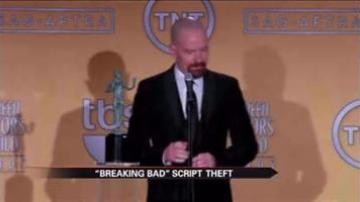 A man is facing charges after police said he broke into the car of an actor from the TV show Breaking Bad.

According to police reports, top secret scripts from the television show's final season were stolen.

Officers said the 29-year-old broke into actor Bryan Cranston's car and stole a bag containing an iPad and a Breaking Bad script.

The man pleaded not guilty to the charges.

Producers of the show have not confirmed if any scripts were stolen.