Bremen Highway section closed off after it buckles again 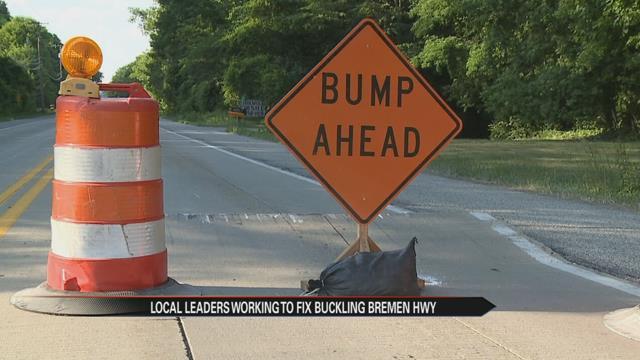 For the third time since May of 2015, part of the road buckled Sunday.

The St. Joseph County Engineering Department says the road buckles from time to time because of contraction and expansion in hot weather.

Some county residents and drivers are still concerned.

“I was just so surprised that it was buckled a second time, and then a third time,” Tanya Sobieralski said.

“To have this out is frustrating to say the least,” Fralish said.

Monday, county highway crews poured new concrete panels for the buckled spot, and another area they say looked like it could have problems in the future.

That section of Bremen Highway has been made up of small panels since 2007.

They are easy to repair but are also susceptible to the elements.

“Due to your normal contraction, expansion of concrete, two of those kind panels of pushed up against one another and popped up,” Clark said.

After this happened three times to different panels, Clark and her coworkers in engineering say they’re watching the area a little more closely.

“We are continuing to monitor that project and where the buckling is occurring to see if we can make a logical connection between what is occurring and try to minimize it,” Clark said.