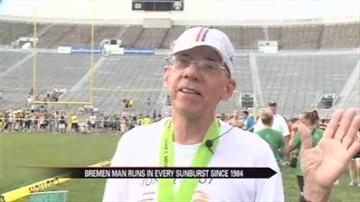 Terry Misner has three Sunburst half marathons under his belt in addition to the 27 full marathons.

Misner told ABC 57 News he has seen a few course changes over the years.

Misner wore a hat at Saturday's marathon that reads "I Love Pain" under the bill. He says that's the attitude someone has to has to get through all those miles at his age.