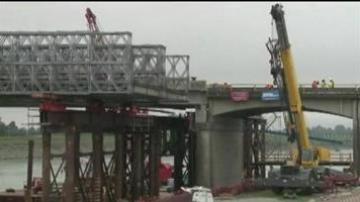 MOUNT VERNON, Wash. -- Traffic is moving again on a key Washington interstate that carries people and goods between the United States and Canada.

Four months after this bridge collapsed into the Skagit River near Mount Vernon, crews installed a new, permanent bridge section.

At the end of May, an oversized truck load smacked into the bridge causing part of it to collapse.

Two cars and three people went into the water but no one was killed.

"This bridge disappeared in the blink of an eye and it represents billions of dollars of economic value
between the United States and Canada so it's critically important to our state, and to our economy," said Senator Maria Cantwell.

The bridge will be named for Washington state trooper Sean O'Connell who was killed while helping detour traffic a week after the bridge collapsed.