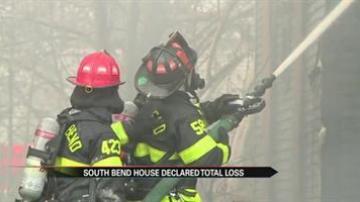 SOUTH BEND, Ind.-- Firefighters were called to a house fire in the 600 block of Bronson Street on Sunday. Crews said the heavy wind and a collapsed roof made it difficult to battle the blaze.

Neighbors told firefighters they saw a man enter the home just minutes before the fire started.

The Battalion Chief for the South Bend Fire Department said they quickly searched the home but no one was inside.

David Maenhout said, “We made very momentary entry and then we came out. We were told by a neighbor that somebody had been in there 5 minutes before.”

Firefighters said no one was hurt fighting the fire but the heavy wind was their biggest obstacle.

Maenhout said, “It was actually a major issue today. We have a house to the west that’s in close proximity and the smoke was blowing right into the house next door which is occupied.”

Investigators declined to comment on whether the fire was an arson investigation or not.

Maenhout said, “A fire this bad this time of day when there are so many people out driving and walking it’s unusual that it gets going that far and that extensive in the middle of the day and nobody sees it until it's fully engulfed.”