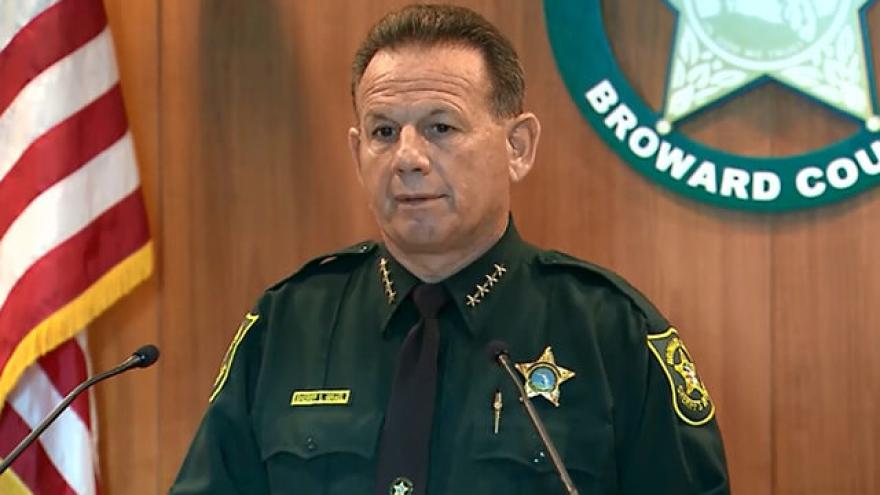 (CNN) -- Broward County Sheriff Scott Israel said Sunday he would not resign in the face of criticism about his agency's response to the Marjory Stoneman Douglas High School shooting.

"Of course I won't resign," Israel said when pressed on the issue by CNN anchor Jake Tapper in a lengthy interview on "State of the Union."

Israel also said he was "disgusted" an armed school resource officer did not enter the school as shots rang out and vowed to investigate any other allegation of inaction.

"I was disgusted. I was just demoralized with the performance of former deputy (Scot) Peterson," Israel said Sunday.

RELATED: Read the full transcript of the interview with Sheriff Israel

CNN reported earlier this weekend that Coral Springs sources said police officers from Coral Springs arrived at the site of the shooting and were dismayed to find three other Broward County Sheriff's deputies, in addition to Peterson, had not entered the school.

Israel said the actions of the deputies are under investigation.

"We're going to be taking statements from those Coral Springs police officers," Israel said. "If any of the deputies are alleged to have dereliction of duty, we'll look into that."

Israel said that, as of now, Peterson was the only officer that he was certain had been derelict. He added that Peterson resigned after being suspended without pay.

"Our investigation to this point shows that during this horrific attack, while this killer was inside the school, there was only one law enforcement person, period," Israel said. "And that was former deputy Scot Peterson. Coral Springs arrived -- a group of Coral Springs officers went in within, I think, about four minutes, we're projecting, after the killer left the campus."

Israel did not dispute that more Broward County deputies might not have entered the school after the killer left but before Coral Springs officers arrived, but he said that, at this point in the investigation, he had no reason to believe anyone else had acted incorrectly.

Alongside his repeated pledges to continue to investigate his agency's actions around the shooting, Israel stood by his own leadership of the department.

"I can only take responsibility for what I knew about," Israel said. "I exercise my due diligence. I've given amazing leadership to this agency."

The Broward County sheriff has taken on increased criticism as more details of law enforcement's actions around the shooting have emerged. On Sunday, Florida Republican lawmakers sent a letter to Florida GOP Gov. Rick Scott, calling on the governor to suspend Israel "for incompetence and dereliction of duty."

Scott's office sent out a news release saying he asked the Florida Department of Law Enforcement to "immediately investigate the law enforcement response" to the shooting, and in a statement later Sunday, Israel welcomed the probe and pledged full cooperation.

"This independent, outside review will ensure public confidence in the findings," Israel said.

Law enforcement received repeated warnings about the alleged shooter before the attack, including a caller saying the eventual gunman could be a "school shooter in the making."

Asked in Sunday's CNN interview about the repeated warnings and his office not initiating a report after the "school shooter in the making" tip, Israel said they were continuing to investigate their handling of the threat warnings and that the officer who handled that call "is on restrictive duty."

He said of 18 calls they received, he was unsure whether deputies handled two of them correctly.

He argued that police do not have the authorities they need to respond to warnings about potential killers making nonspecific threats by arresting, giving them medical attention and restraining their access to firearms.

Israel repeatedly vowed to get to the bottom of the situation and said they would release their results when they are certain they have all the facts.