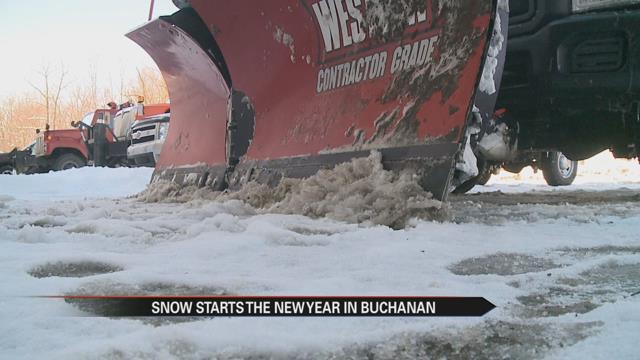 The first snowstorm of 2016 dumped a little more than six inches of snow on the ground in Buchanan, but crews were ready for it.

Most of Michiana was coated in white Sunday night into Monday morning, but Buchanan topped the charts with 6.2 inches of powder.

But by late Monday morning, it was hard to tell that the streets were filled with half a foot of snow only hours before.

The city’s four snowplow drivers worked late into Sunday night and started up again in the early morning hours on Monday to keep the roads clear and safe.

And though the roads throughout the city looked close to normal Monday afternoon, below-freezing temperatures are expected to freeze the slush that was left in the streets Monday night.

“The temperatures will go down and it’ll refreeze and then the cops will be out on the streets and they’ll call us,” Buchanan DPW worker Michael Baker said. “They’ll call me and say, ‘hey we need a salt truck,’ and I’ll dispatch myself or one of the guys to come and take care of it.”

According to Baker, there are two very helpful things residents can do for any and all snowplow drivers.

First, anyone with a driveway can keep their car parked in it, instead of attempting to block the driveway entrance from the plows or parking in the streets, if you don’t have to.

“The best advice is to do the right thing and park in the driveway and wait for the plows,” Baker said. “We don’t have anywhere to put [the snow], so we have to put it in your driveway, unfortunately.”

Second, Baker said it’s important to drive cautiously in the snow, and to approach stop signs slowly, leaving enough room between you and the intersection to stop.

Baker said two of the city’s plows were involved in accidents Monday because of the slippery roads.