Burglars cause over $100k in damage to Arbys 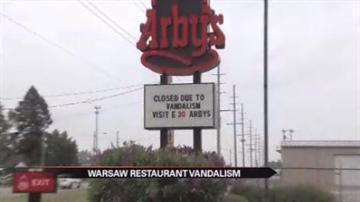 WARSAW, Ind. -- Two South Bend men are facing charges in connection with break-ins at several Warsaw restaurants. So much was damaged at the Arby’s in Warsaw, the restaurant was forced to close and it may be closed for up to three weeks.

"Why? Why did they do this? What was the point? I mean were they on drugs? Because that's what it looked like, somebody was just on drugs and went nuts and was hitting everything with everything and throwing things everywhere,” said Arby’s Manager Wendy Nicholson.

Nicholson is a manager at another Arby’s restaurant about 8 miles away, but on Sunday morning she responded to the Arby's on North Detroit when its manager opened up and realized someone had broken in.

"Up here all of our registers were destroyed. It was way more than what I thought it was going to be,” said Nicholson.

They allegedly hit several different restaurants in the Warsaw area early Sunday morning, but it was the break-in at Arby's that got them caught.

After doing the inventory, the store management realized what was missing- a new printer, a bag of frozen mozzarella sticks and a lot of beef.

When police pulled over the suspects’ car, they couldn't help but see the Arby's commercial products in the backseat.

Nicholson says they had close to $200 in products and caused more than $100,000 in damage to the restaurant.

"We have to replace everything register wise and computer wise and monitor wise which we can't operate without it,” said Nicholson.

They will also lose more than $5,000 in sales each day they are closed.

"The loss in sales in that regard is huge to stay closed one to three weeks,” said Nicholson.

The suspects also destroyed the fryer, shake machines and a commercial slicer for their meats.

Both suspects are in the Kosciusko County Jail on burglary charges.