Bus crashes into rolled over tanker 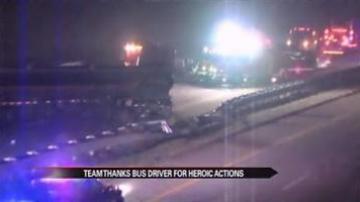 SOUTHFIELD, Mich. -- Her quick thinking behind the wheel saved their lives and now a children's football team is thanking a Michigan bus driver for her heroic actions.

A bus carrying a youth football team in Southfield, Michigan crashed into a rolled-over tanker last week on I-75.

Police said the driver of the tanker swerved to avoid a deer which caused the tanker to jackknife and roll over.

The driver of the bus attempted to avoid the vehicle, but sideswiped the tanker.

The driver was seriously injured, but was able to save all the kids, coaches and parents who were following. The team was able to go on to their game and decided to give the driver their trophy as a thank you.

"They told me it wouldn't hit me until later.  And I guess it's hitting me now, now that I'm really talking about it, but that's nice of them," said Kay Chatman, hero bus driver.

That driver got a few stitches for her cuts and is recovering from a bruised lung.

At least two players and one parent suffered minor injuries.