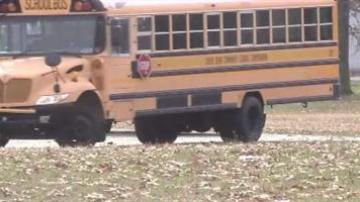 SOUTH BEND, Ind. -- SBCSC Veteran bus driver Rodney Jennings claims an irate out of control mom cut off his school bus with her SUV last month and then stormed on to his bus. He claims the 23-year-old mom named Sarah Brown removed her son from his bus along with other neighborhood children who live in the Beacon Heights Apartment Complex.

Jennings grabbed his cell phone to record the situation after a video camera on his bus failed to record a similar situation a week earlier involving the same woman.

A day after the Sept. 17 incident Brown filed a police reportt. According to the report, her son attends McKinley Primary Center and he was riding on Jennings bus. She told police Jennings pulled one of the children on the bus in a jerking manor that she felt was unnecessary and she said Jennings used language that she felt was inappropriate.

The :43 second video clip shows Brown's SUV parked in front of Jennings' bus clearly blocking his route of travel. Then the video pans up to show Brown storming onto Jennings bus despite him repeatedly telling her to please step off the bus.

ABC 57 News stopped by South Bend Community School Corporation's Transportation center located on Bendix Drive. We met with the Interim Transportation Director Mike Nolen who told us that he was told by administrators he could not comment on camera about the situation. However he was able to tell us out of the 242 buses in their fleet. 94 of the buses are equipped with digital video cameras and 148 buses have the older model VHS video cameras.

Jennings told ABC 57 News his bus is only a few years old and does have the new digital camera technology. He said when the school corporation pulled his video tape of the first incident involving Brown they found out nothing was recorded and the video was from last year.

We called back Jennings to do an on camera over the phone interview and he declined stating his superiors have asked him not to comment on these situations.

ABC 57 News contacted SBCSC School Board president Roger Parent, Bill Sniadecki the vice president and District 4 representative Dawn Jones for comment. All three said they were aware of the situation and the school corporation is looking into the matter.

An email request for an on camera interview was sent to Superintendent Carole Schmidt, however we have not received a response at this time.

Note:  In a previous version of our online story, our headline read that a school bus cam failed to record the incident.  Bus-cam is a registered trademark and was not the video recording equipment used on the bus at the center of the incident.
Share this article: