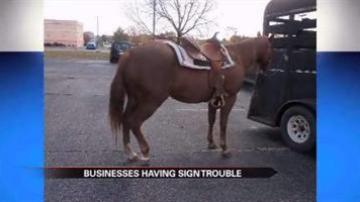 MISHAWAKA, Ind. -- It is so difficult for some businesses to advertise in Mishawaka, one business owner has resorted to getting a horse. The city’s strict sign guidelines can cost businesses time and money.

Salsa's Mexican Restaurant on Day Road in Mishawaka has a sign problem.

They want to use the old Don Pablo's sign above their building but the city of Mishawaka doesn't make it easy.

"We tried to do it before and they tried to put tickets on us for that and I don't see why it’s bad to do that if other people have their signs and stuff like that,” said Francisco Gomez of Salsa’s Mexican Restaurant.

Since the old sign isn't at ground level, they would have to apply for a variance with the city of Mishawaka.

That costs time and money.

"When you talk about signs, everyone wants bigger and better and the purpose of a variance isn't to get bigger it’s to get better,” said Ken Prince, Mishawaka City Planner.

Until the restaurant gets a sign, they say they're using the biggest thing they had available: an employee's horse named Darla.

"It really is helping us a lot. Business has gone up higher because of the horse. Some people say it’s bad to put horses but it’s not. I mean it's helping us have people come in. We wouldn't do that if we could put a sign up there,” said Gomez.

Other businesses have noticed Salsa's efforts as well.

"I noticed that Salsa's Mexican grill has a pony and a horse riding back and forth. And evidently Mishawaka does not yet have an ordinance against ponies and horses as long as they're moving with signage,” said Reed Burrer of Futon Factory.

Burrer relocated his store to Mishawaka and thought his old sign still looked great, but he was forced to make adjustments.

"Any outline of any part of a sign can't be any higher than the edge of the building. And as you looked at our sign from the road at an angle you could see a partial outline of the very first and very last letter of our sign,” said Burrer.

He paid to fix the sign, and said he's certain Mishawaka looks nicer because of the ordinance but it can turn into a headache.

The city planner said all creative signs are encouraged, just not animals.

"I wouldn't encourage on a horse because I don't think a horse is safe on Grape Road,” said Prince.