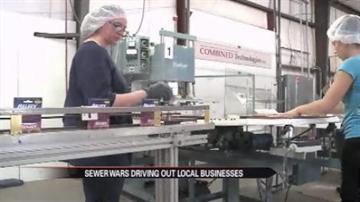 ELKHART COUNTY, Ind. -- The sewer war between local businesses and the mayor of Elkhart is causing more headaches. The proposed sewer rates are hurting some businesses so much they are getting ready to leave the county – and take jobs with them.

"We moved to Elkhart because it was business friendly. It seemed like it was the Mecca for anything to happen in manufacturing and we had the lower taxes. That's why we wanted to move here,” said Dave Salt, the Vice President of Operations for Just Pack It.

The company moved to Elkhart from South Bend two years ago.

"We were looking at expanding the business and actually looking at putting an addition on the building because we need more space,” said Salt.

Salt says the expansion would bring in about 30 more jobs to the local Elkhart economy.

But because of the ongoing compact sewer fee debate, the expansion plans have been tabled and the current jobs are at risk.

"Right now we can't do anything. So we're actually talking with a realtor to go back to South Bend,” said Salt.

Just Pack It is paying roughly $45 a month for their sewer fees, about 3 times the rate of a business that is within city limits.

But Elkhart Mayor Dick Moore's proposal would increase that $45 to about $400 a month.

"It's really stopped us dead in our tracks. It's been a kick in the teeth for us,” said Salt.

Salt's company is one of about 140 businesses and residents affected by this proposal.

Steve Schemen is one of the affected business owners who has become the unofficial secretary for the group.

He says there are cases that are even worse than just pack it.

Now, the issue is at a standstill.

The mayor has appointed a task force to resolve the dispute within a year. A period that's just too long for many businesses.

The mayor’s initial proposal was for businesses to pay a percentage of what the buildings are assessed.