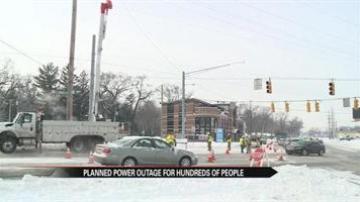 A tripped circuit on Monday night caught residents off guard.

"They had a transformer that blew up because I heard a big bang here the other day, and the lights flickered a little bit so I knew there were power problems someplace," said resident Vern Linback.

To fix the problem, Indiana Michigan Power scheduled a planned power outage for about 600 customers in and around the Wooded Estates neighborhood.

Linback was able to prepare ahead of time.

"Get my generator ready, make sure it would run last night. Put the gas in it so it was all ready to go. Turn some of the stuff off, the power off in the house there that was not necessary. And make sure the house was warm just in case that thing fails."

But still Linback bundled up and prepared for the worst.

"I got a couple layers on underneath this. You plan ahead for things like this because in the end if you don't you are going to pay for it in the long run," said Linback.

Power was restored right on schedule at 1 p.m.

But some traffic lights, including the one at SR 23 and Edison, were still not working at 5 p.m. and caused major traffic backups.