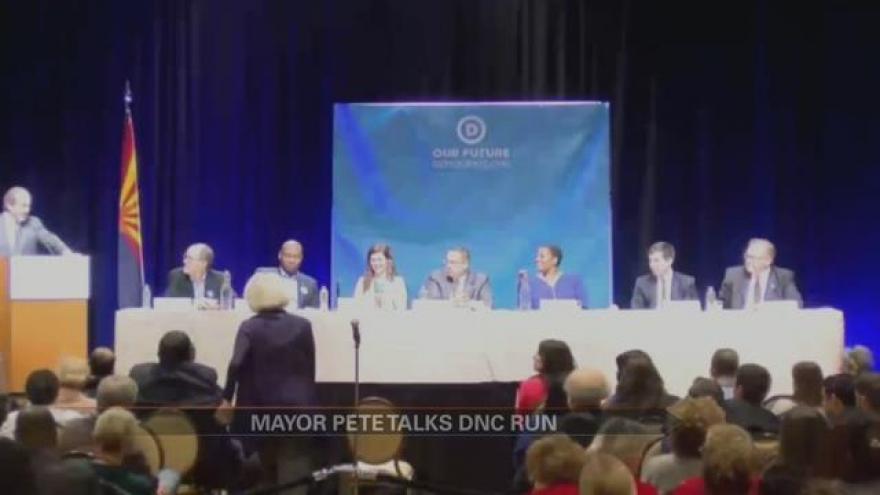 We caught up with South Bend Mayor Pete Buttigieg Monday morning after he spent part of the weekend in Arizona for a DNC chair candidate forum.

“They call me Mayor Pete,” Buttigieg said, as he introduced himself at the Saturday forum. “I’ve been the mayor of my hometown, going on my sixth year. Love the job.”

It was an introduction to Buttigieg’s vision for the Democratic Party.

He, along with six other candidates, took questions from a moderator and members of the Democratic National Committee in Phoenix.

Buttigieg made his pitch for rebuilding the party by reviewing his record in South Bend.

“Part of how I got 80 percent of the vote in my reelection was not by becoming conservative, but by making sure we were speaking to everybody,” Buttigieg said at the forum.

Buttigieg made an effort to describe the voters in middle America that he represents – the voters Democrats struggled to connect with in 2016.

“You gotta understand that a lot of the people who live right up the street from me who voted for [Donald Trump] already know he’s not a good guy,” he said at the forum. “They voted for him anyway. Why? Well, for one thing, we were so busy talking about Donald Trump that they were saying, ‘Who’s talking about me?’”

Back in South Bend Monday morning, Buttigieg said he felt good about the first forum.

“I felt that Phoenix went very well,” he said. “People were really receptive and responsive to our message, hearing about South Bend’s story, and I got a lot of good feedback afterward.

Buttigieg also talked about being openly gay at the forum, saying, “Here’s a very 2017 sentence – I started Thanksgiving morning in a deer blind with my boyfriend’s father.”

The next DNC forum will be in Houston, Texas on January 27 and 28.