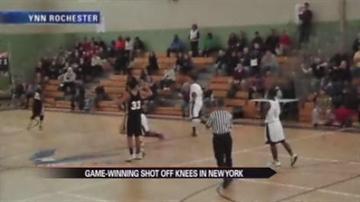 NEW YORK — A high school basketball tournament came down to the final second. And one player made a desperate attempt to beat the buzzer.

The game was tied up at 54 when a player fell down just seconds before time ran out.

That is when he tossed the ball up and somehow the ball went into the basket.

His team walked off with the victory.

"I know that the clock was running down, so I wanted to be the one with the ball and as I fell, I knew to keep my dribble so I can get back up, and I got back up," said Bay Barley. "I was ready to shoot the ball."

The video of the basket went viral and was also shown on ESPN's Sports Center.