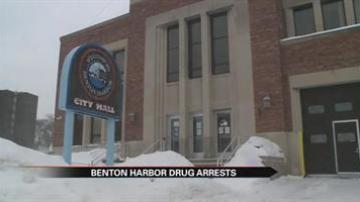 BENTON HARBOR, Mich. -- As of 2012, Berrien County ranks fifth in the state of Michigan for marijuana arrests per 1,000 people. In Benton Harbor, residents are 3 times more likely to be arrested for a marijuana charge than anywhere else in the state.

With marijuana on the minds of many lawmakers nationwide, we decided to look into marijuana-related crimes.

Benton Harbor and Niles have some of the highest arrest rates in Michigan.

"The officers are getting more trained and more experience," said Boyce.

Boyce says it's because of training. Drug use isn't up, police are just better at knowing what to look for.

Some residents say the police in Benton Harbor may be unfairly targeting people.

But some residents aren't buying it.  Those we talked with feel the police in BH may be unfairly targeting people.  Data we looked at put the city at 2nd in the state for weed related arrests per capita.  More than 10 for every 1000 people.  The average for Michigan is closer to 3  per 1000.

Benton Harbor has around 100 marijuana related arrests per year. So they don't have a lot overall. The town only has 10,040 people according to the 2012 census.

We contacted the Benton Harbor Department of Public Safety and are waiting to hear back.