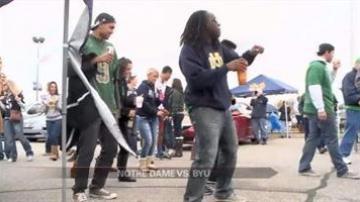 SOUTH BEND, Ind. -- Whether you're a fan of the BYU Cougars or the Fighting Irish, Saturday's tailgate had no shortage of things to do.

There was dancing, grilling and some cornhole games in between.

Courtney Long traveled all the way from Salt Lake City, Utah to cheer on her Cougars.

Saturday was her first visit to South Bend, an experience, that's hard to put into words.

"It's totally different than what we've experienced in other places, because I think of the tradition," said Long. "We all grew up watching Rudy."

Long joins thousands of other BYU fans at Notre Dame Stadium this weekend.

She and others are hoping an upset is in the cards.

"I hope our defense shows up,"  said Paul Carter, a BYU fan. "And hopefully, our offense can keep it going like they did last week against Oregon State."

"The fans are doing what we gotta do," said Jake Erlenborn, a Notre Dame fan. "We gotta get in there and cheer on our team."

Fighting Irish fans are hoping the team can keep the momentum from the first half of the season going.

And as long as the Irish keep winning, fans will keep cheering.