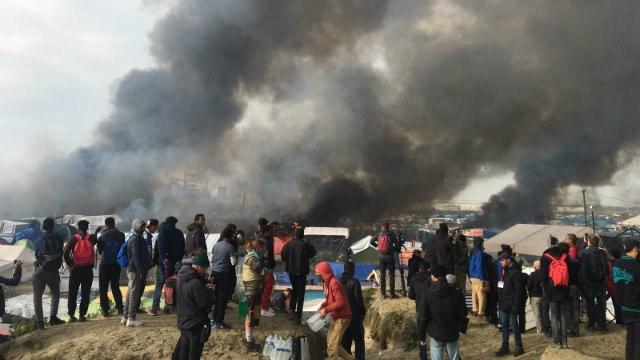 (CNN) -- French authorities Wednesday finished moving the last of the 1,616 unaccompanied minors housed at the country's "Jungle" migrant camp, as British officials prepared to assess them for settlement in the UK.

The children had been living in shelters made from converted shipping containers at the camp in the port town of Calais as the tents and shacks around them, which once housed thousands of other migrants, were demolished over the past week.

The last remaining shelters were pulled down Monday, leaving only the containers standing.

The Calais prefecture told CNN that all of the young migrants had left on board 38 buses. On Thursday, 300 mothers with their children will leave for family shelters. They have already been moved to a nearby relief center away from the Jungle.

France last week evacuated at least 6,000 migrants and bussed them to other regions to begin the process of resettlement.

Authorities from the Nord Pas de Calais region said the children would be spread out among 60 processing centers, where officials from the UK Home Office will assess their situation and decide whether they should be settled in Britain.

The UK has agreed to take in a number of unaccompanied minors from the camp, as well as others with family ties in the country.

The Jungle sits some 30 miles across the English Channel from Britain, one of the more desirable destinations for refugees in the region.

French authorities vowed to shut down the migrant camp for months but were shot down several times by court decisions.

The camp became a gritty symbol for Europe's migrant crisis, fueled by unrest in the Middle East and political instability in parts of Africa.

The UN children's rights watchdog said that the British and French governments fell "seriously short of their obligations under the Convention on the Rights of the Child" in their handling of the Jungle clearance.

In a statement, the Committee on the Rights of the Child urged the countries to urgently address the situation of unaccompanied children who had been forced to take shelter in disused shipping containers or sleep outside as the camp was demolished.

"The events of the past week have shown clearly that political and other considerations prevailed over the initial promises by both governments that the situation of unaccompanied children would be their priority. The best interests of the child have been completely disregarded," said the committee.

"Disagreements between the French and UK governments over who should take responsibility for the majority of these children have led to major violations of these children's rights. Hundreds of children have been subjected to inhumane living conditions, left without adequate shelter, food, medical services and psychosocial support, and in some cases exposed to smugglers and traffickers."