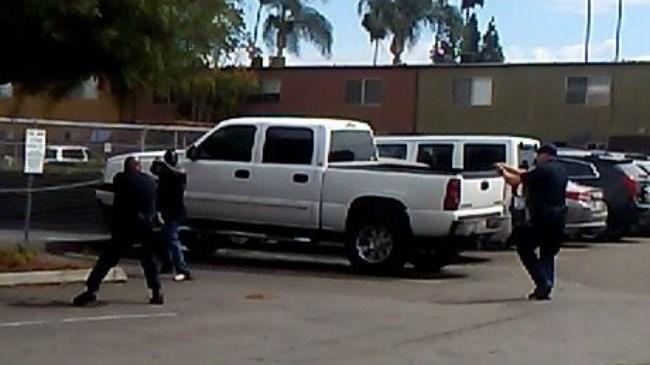 EL CAJON, California (CNN) -- Activists dismayed by the police killing of an unarmed, possibly mentally ill black man in El Cajon, California, demanded Wednesday that authorities release video of the shooting and that federal authorities probe into the man's death.

As of mid-day Wednesday, police had released little information about the incident, aside from a still photograph showing the African-American man, in what authorities describe as a "shooting stance," facing off with two officers in a parking lot.

Police have not released the man's name. No gun was found.

The Rev. Shane Harris, president of the San Diego chapter of the National Action Network, called releasing the photo "cowardly." Harris, who said he had spoken to the dead man's family, was one of several speakers addressing reporters in front of the El Cajon Police Department.

"We do not trust local prosecutors to investigate local police," he said, explaining the family's desire for a federal investigation.

Harris questioned how police could release such a seemingly damning photo while purporting to pursue all the facts and refusing to release video from witnesses and those at a nearby restaurant.

Added Bishop Cornelius Bowser of Charity Apostolic Church, "We don't want to see a still picture of him pointing something that is not gun. ... The best way to move forward right now is through transparency."

Citing a countywide protocol pertaining to officer-involved shootings, Police Chief Jeff Davis said Tuesday he was merely following guidelines in not making the video public. His department released the photo to counter "disinformation," he said.

"This (video) is considered evidence, and until it is deemed otherwise, it will be under the control of the district attorney's office," he said.

On Tuesday afternoon, El Cajon police responded to a 911 call reporting an African-American man in his 30s who was behaving "erratically" behind a restaurant at the Broadway Village Shopping Center, Lt. Rob Ransweiler said.

According to the call, the man was "not acting like himself" and had been walking in traffic, endangering himself and motorists, Davis said.

The woman calling 911 claimed to be the man's sister and told the dispatcher that he was mentally ill and unarmed, Davis said. Investigators have not been able to confirm if the caller was the man's sister, he said.

"We tried to get her to talk to us. As you can understand, she was upset. She was not cooperating with us," the chief said, asking the woman to come forward to speak with investigators.

Officers did not respond to the first 911 call for 50 minutes because "it did take us that long to clear officers to get out there," Davis said.

Once they arrived, the man kept his hands concealed in his pockets while pacing back and forth. As a second officer prepared a Taser, the man "rapidly drew an object," placed both hands on it "like you would be holding a firearm" and stood in a "shooting stance," according to police.

Davis did not say what type of object was found. Pressed on whether it was a weapon, he said it was not. There was no indication the man was under the influence of drugs of alcohol, Davis said.

One officer fired his gun at the man, while a second officer discharged his Taser, he said. Neither officer has been identified, and both are on three-day administrative leave, the chief said.

'They killed my brother'

In the aftermath of the shooting and the man's death, Rumbie Mubaiwa began filming on Facebook Live.

In the video, a distraught woman says she called 911 to get help for the man she says is her brother. She describes him as "sick."

Several police are on the scene. One interviews a witness and two put up yellow police tape. Several officers can be seen congregating in the background as the sister sits on a rock wailing.

"You guys killed my brother in front of me," she cries, as Mubaiwa records the scene. "Why couldn't you guys Tase him? Why? Why? Why? Why?"

Police have not confirmed if the woman in the Facebook Live footage is the man's sister. Christoper Rice-Wilson, the director of civic engagement for Alliance San Diego, told reporters Wednesday that family members requested privacy while they grieve and would make statements at some point in the future.

'We just want to grieve'

About 200 people gathered Tuesday night near the scene in El Cajon, about 15 miles outside San Diego, CNN affiliate KUSI-TV reported.

After El Cajon police held a news conference, protesters surrounded the entrance of the headquarters, carrying signs calling for an end to police brutality, KUSI reported. The crowd started to dwindle shortly after the news briefing.

"It kind of makes you think, 'Hey, that could be me,'" protester Caleb Quarles told CNN affiliate KGTV-TV. "That could one of my friends. That could even be my mom."

Early Wednesday, eight African-American mourners were still in the parking lot where the man had been shot. They had silently formed a circle, praying as they held hands, faintly illuminated by religious candles.

"Obviously we knew him or we wouldn't be here this late," one of the mourners said. "We just want to grieve."

They drove away moments later.