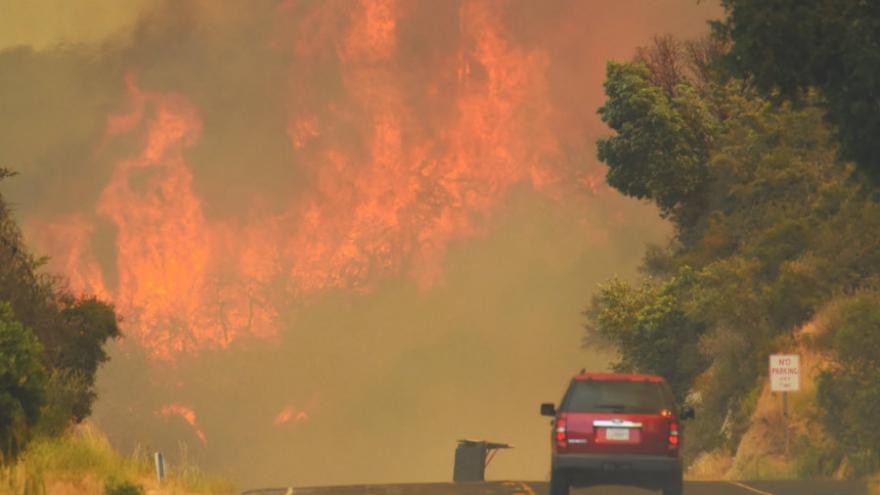 (CNN) -- Wildfires burning through California left children at a summer camp temporarily stranded and forced campers to leave behind tents and boats to escape the flames.

The blaze, which is close to Los Padres National Forest, is burning on both sides of highway 154 near the San Marcos Pass.

At least 2,000 people were evacuated Saturday, including at least 60 campers -- most of them children-- who were attending the Circle V Ranch, a popular summer camp program in the area, DePinto said.

All campers and staff are safe, organizers said in a message posted on social media.

"We would like everyone to say a prayer for the brave fire fighters who kept us safe and continue to battle the fire," they wrote.

The flames spread to several recreational areas such as Camp Whittier and Lake Cachuma, forcing visitors to abandon tents, RVs and boats. A sheriff's vehicle was also destroyed east of Lake Cachuma but the deputy was not hurt, a county spokesman said on Twitter.

The fire is believed to have started Saturday around 1:45 p.m. (local time) at Camp Whittier. The cause of the fire remains unknown, Los Padres National Forest officials said.

On the county Twitter feed, officials said the fire was 0% contained late Saturday.

Forecasters said the high temperatures Sunday will be near 95 Fahrenheit. Winds might gust as fast as 20 mph, the National Weather Service said.

About 60 miles southeast, between 150 to 200 homes were issued evacuation orders due to another blaze, DePinto said.

The Alamo fire has grown to more than 19,000 acres near California Highway 166 and is only 10% contained since it was first reported Thursday, county officials said.

The county said the area affected hasn't burned in many years. Smoke from the fire is visible in Santa Maria, a city with more than 100,000 residents.

Authorities have said that ground and air resources have been deployed to face this blaze's "extreme fire behavior."

Meanwhile in northern California, officials have ordered the evacuation of more than 300 homes in Butte County due to another wildfire, a spokeswoman for Cal Fire said.

The blaze known as Wall Fire started Friday and has since burned 2,700 acres. As of Saturday, it was only 20% contained, officials said.

This fire is "very dynamic and the numbers are expected to change," the spokeswoman said.

At least 10 structures, including homes, have been destroyed while five others were damaged, officials said.

CNN's Steve Almasy and Joe Sutton contributed to this report.