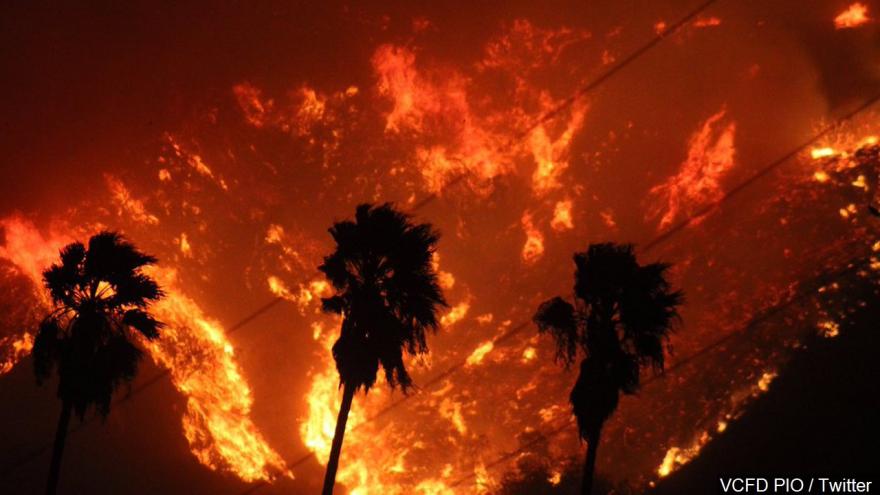 (CNN) -- Gov. Jerry Brown has a sobering message for Southern Californians after a week of raging wildfires: This is your new normal.

A half dozen fires have collectively scorched nearly 200,000 acres since last week and destroyed 792 structures, according to officials.

As 4,000 firefighters battled the largest one, the Thomas Fire, the governor surveyed the damage in Ventura County on Saturday.

"This is kind of the new normal," he said, adding that extreme fire activity will happen on a regular basis for decades.

"With climate change, some scientists are saying that Southern California is literally burning up," he said. "So we have to have the resources to combat the fires and we also have to invest in managing the vegetation and forests ... in a place that's getting hotter."

Mother Nature was not offering any encouragement, either. On Sunday, wind gusts were expected to be between 45 and 60 mph. The winds had weakened slightly Saturday, giving firefighters a much-needed break after days of erratic conditions.

Gusts are forecast to decrease on Monday, and will be between 20 and 30 mph. But forecasts show no rain for California for the next 10 to 14 days. Warm temperatures and periodic wind gusts mean the threat of fire will continue for the time being.

At least one death has been blamed on the Thomas Fire, which broke out in Ventura County on Monday. Authorities believe Virginia Pesola, 70, of Santa Paula, died in a crash while fleeing the fire.

Setbacks: A Red Flag Warning is in effect for much of Los Angeles and Ventura counties until Sunday evening, the National Weather Service said. It means that critical fire weather conditions are expected due to a combination of gusty winds and low humidity.

Progress: Cal Fire director Ken Pimlott said firefighters are making a lot of progress, but there's still much to be done. "We're far from being out of the woods on any of them," he said.

Teamwork: Nearly 1,000 fire departments across California are involved in efforts to contain the blazes.

The six blazes vary in size.

Thomas Fire: It had scorched 173,000 acres by early Sunday, with about 15% of it contained. It started Monday in Ventura County, and has since spread into Santa Barbara County, making it the biggest in the Los Angeles area since the Bel-Air fire in 1961 torched the homes of the rich and famous. More than 4,400 people are battling the blaze, according to Cal Fire.

On Sunday morning, as the fire was advancing toward Montecito, residents of nearby Carpinteria could see ribbons of flames in the foothills, sending smoke curling into the sky. Water-dropping helicopters were helping fight the blaze alongside at least one hundred fire engines, some from as far away as Portland, Oregon.

Creek Fire: The second-largest blaze ignited a day later in neighboring Los Angeles County. It has burned 15,619 acres and is 90% contained.

Rye Fire: It broke out Tuesday in Los Angeles County and has burned 6,049 acres. Firefighters are making progress, with 90% of the blaze contained.

Lilac Fire: This fast-moving fire has consumed 4,100 acres since it ignited Thursday in San Diego County. Firefighters have regained control of it, and it's 60% contained.

Skirball Fire: It started Wednesday as a brush fire in Los Angeles County. It has burned 421 acres and is now 75% contained.

Liberty Fire: The blaze in Riverside County has burned 300 acres since it ignited Thursday. It's 100% contained, but authorities are monitoring it as winds pick up.