California's drought is almost over 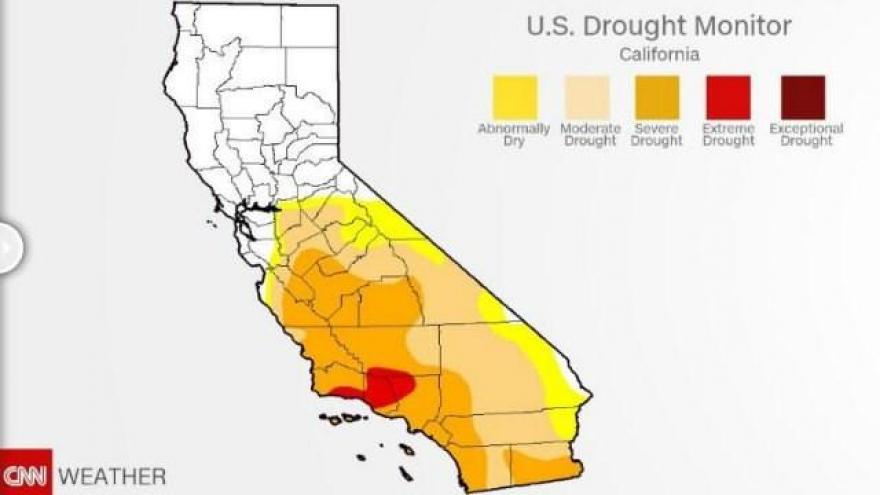 (CNN) -- A series of potent winter storms that lashed Northern, and more recently Southern California, has erased the worst of the long-term drought that plagued the Golden State for three years.

For the first time in 36 months, the US Drought Monitor report issued Thursday does not show any part of California in deep red, which denotes its highest designation, "Exceptional Drought."

At its height, the Exceptional Drought area covered nearly 2/3 of the state and as recently as Christmas of 2016, approximately 20% of the state was still in the worst of the drought.

It's not just the worst drought areas that have improved. Now, 38% of California is completely clear of any dryness, according to the Drought Monitor, the most drought-free area since December of 2011.

While the record El Niño of 2015/16 failed to live up to expectations when it came to putting a dent in the mult-year drought, a series of moisture-rich storms fueled by "atmospheric rivers" so far this winter has done the job.

In addition to bringing abundant rainfall to flow into area lakes and reservoirs, these storms have dumped historical amounts of snow in the Sierra Nevadas, a boon to local ski resorts, which have suffered for several years with below-average snowfall.

Squaw Valley and Mammoth Mountain, in northern and central California, have received more snowfall this month than in any single month on record (212" and 246" respectively). In Southern California, Big Bear Mountain and Snow Summit have picked up 110", which is more than they have totaled in any entire year since 2011.

Drought not over yet

But that doesn't mean that the drought is officially over, nor does it mean that everyone has water available at this time. It will take months for the snow to melt and make its way into the groundwater, which is so important to many California residents.

"To date, groundwater levels have not responded as one might expect, and remain critically low... water supply is dependent on groundwater," Tinker added. "Thus potable water is still being trucked in to serve residents with dry wells in areas such as Tuolumne County, and the deepest wells may not respond to the recent inundation for many more months."

As for declaring the drought officially over, that will need to come from California Gov. Jerry Brown. He declared a drought emergency in 2014 and through a series of declarations and executive orders has triggered a number of water conservation and efficiency actions in the state.

While the drought may have rapidly and significantly improved, and may even be declared over in the near future, Californians would be wise to continue to discretionary use of the state's water resources.

"Water conservation is a way of life. It's not going to change," says Richard Santos, director of the Santa Clara Valley Water District. "We're an arid region for the rest of our lives. History will repeat itself. Like all good people, we put money in the bank for those rainy days that don't come."

CNN's Emma Shapiro and Judson Jones contributed to this report.