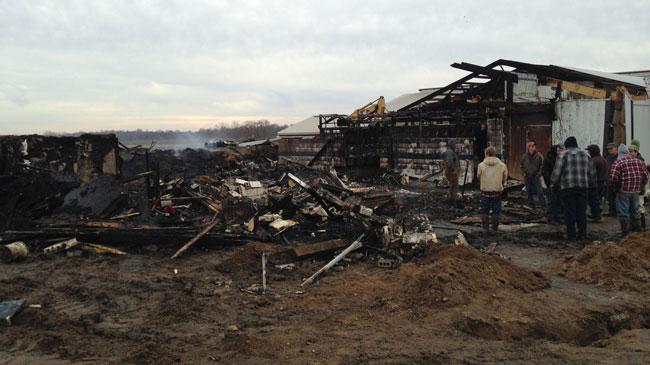 The fire started around 1:30 a.m. in the dairy barn, according to Harrison Township Fire Chief John Martin.

Chief Martin says it took three hours to put out the fire and firefighters were on site a total of seven hours.

Chief Martin says the fire may have been caused by an electrical issue with some of the milking equipment.

The dairy barn is a total loss, but some of the equipment is salvageable.

No people were injured, but four or five calves were killed in the fire.

The owner, Roy Zimmerman, says he will rebuild.

“We will finish cleaning up and then we will somehow rebuild. Haven’t decided yet how or what but we will. We got enough support it’s not as big of a disaster as it appears. I’m just thankful that it is here and not in the house," said Zimmerman.

The Zimmerman family says they are grateful for the support they have received.

He said he is grateful no people were injured.

“It’s just one of the facts of life that sometimes we have to face. I’ve had other disasters in life. I’ve lost a number of children in accidents and this is minor to that,” said Zimmerman.

More than 50 volunteers showed up to Ruebury Farms to help clean up the damage from the fire, help put out hot spots and support the family.

“Over the years we have always helped when neighbors have had problems and barn fires or tragedies we all try to hover around each other it’s just our belief,” said David Bough.

Bough showed up to help out a fellow farmer.

“We can fix buildings, we can buy more cattle, we can fix machinery but we can’t bring back people so we are just thankful that they are all safe,” said Bough.