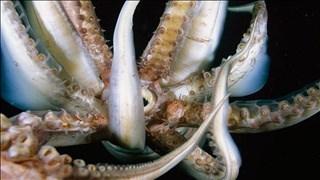 One of the world's oldest organism groups, cephalopods, like squid, octopus and cuttlefish, have survived in Earth's oceans for millions of years.

The key to their survival: mastering the art of camouflage.

Now, scientists say, these ancient invertebrates may hold the key to developing a combat technology that will allow soldiers to avoid infrared detection.

Researchers at the University of California, Irvine say they have discovered a way to use proteins in the cells of pencil squid to develop "invisibility stickers" that can be worn by ground troops.

"Soldiers wear uniforms with the familiar green and brown camouflage patterns to blend into foliage during the day, but under low light and at night, they're still vulnerable to infrared detection," said Alon Gorodetsky, assistant professor of chemical engineering and material sciences.

"You can draw inspiration from natural systems that have been perfected over millions of years, giving us ideas we might never have been able to come up with otherwise," he said.

Gorodetsky and his team have focused on specialized squid cells known as iridocytes, which contain a unique light-reflecting protein called reflectin. They were able to engineer E. coli bacteria to synthesize reflectin and coat the protein onto a packing tape-like surface to create the "invisibility stickers."

Researchers say these reflectin-coated stickers can be changed into virtually any color with a chemical or mechanical stimulus.

"There is a lot of flexibility in how one can deploy this material, essentially, by taking the stickers and putting them all over yourself, you could look one way under optical visualization and another way under active infrared visualization," Gorodetsky said.

The lab technology is not ready to be used in combat zones as researchers work to develop an adaptive camouflage system, in which multiple stickers are able to work in sync and respond to varying infrared wavelengths.

"We've developed stickers for use as a thin, flexible layer of camo with the potential to take on a pattern that will better match the soldiers' infrared reflectance to their background and hide them from active infrared visualization," Gorodetsky said.

The researchers' work was recently presented at the 2015 American Chemical Society national meeting.

By Azadeh Ansari and Zachary Cohen