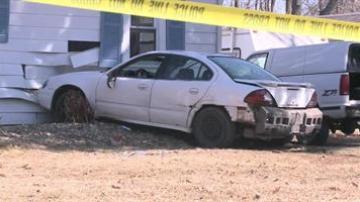 SOUTH BEND, Ind. – A 54-year-old driver struck a Clay Township home after police chased him for allegedly stealing candy from a gas station.

The Meszaros family got a not so sweet awakening when a car careened into their kitchen.

"I thought they dropped something loading the dishwasher," said Joe Meszaros.

“A tornado hit,” said Joey Meszaros. “The microwave is downstairs and the dishwasher, all the dishes are broke.”

When the car came crashing in, father and son were spending their Sunday watching TV.

“We didn’t know what happened,” said Joe. “These cops pull up and they pull the guy out of the car. It was just real fast, it was crazy.”

Saint Joseph County Police say it all started down the street at a gas station where 54-year old Alan Nick stole a handful of candy bars.

Nick allegedly led police on a chase through Roseland that ended when his car lost control and he slammed into the Meszaros’ home.

“They were sitting there ‘freeze,’” said Joey Meszaros. “And they were tazing and it was just crazy man.”

Nick was taken to the hospital with non-life threatening injuries.

“There were a lot of candy bars,” said Joey. “I dub him the candy bandit.”

The Meszaros are happy no one was seriously hurt in the accident.