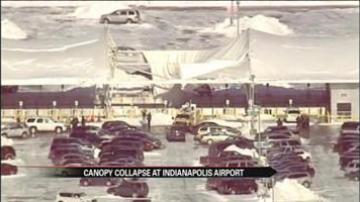 For the second time in the past four years, the canopy over a parking garage at Indianapolis International Airport has collapsed thanks to heavy winter weather.

Officials said Tuesday morning that the canopy over the airport's terminal parking garage collapsed under the weight of recent snow and ice.

Back in 2011, the canopy saw similar issues, with heavy winter precipitation weighing it down and causing problems.

No one was injured in this morning's collapse, and unlike the collapse in 2011, no cars were damaged this time.

Officials said the garage is still open, although there are areas closed off  to traffic so crews can pull down the rest of the canopy and begin repairs.

Indianapolis International Airport spokesman Carlo Bertolini said the garage  canopy has been re-designed since the last collapse. Tuesday's issue was the same kind of failure - too much weight from snow and ice - but it is different in scope, Bertolini said.

Engineers plan to take a look at the canopy's design again to see if they can come up with something that will be more durable during winter months.