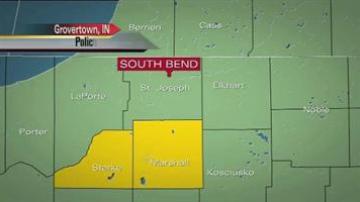 The incident began with a routine traffic stop when Paul Coffin allegedly backed his car into the officer’s patrol car near Grovertown at US 30 and 1100 Eas.

Coffin allegedly sped off, and an officer fired three shots at his car.

The chase ended at Union and 7th Road.

Paul Coffin is in jail with no bond.

The Indiana State Police are investigating since an officer fired shots in the suspect's car.