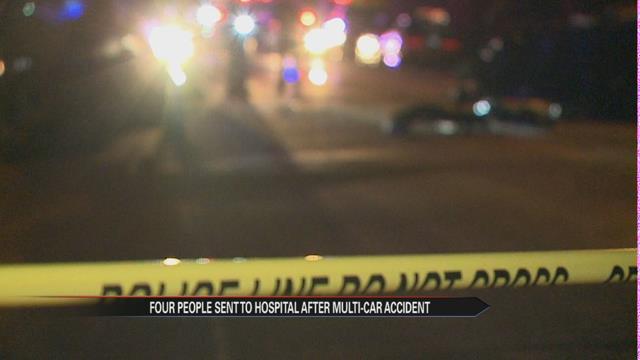 The crash happened around 2:30 a.m. following an unrelated crash at the intersection of Walnut and Western Avenue where South Bend Police were present.

While they were on scene of a minor property damage crash, a blue SUV sped through the area.

“Officers were out interviewing people from the previous crash, so there were officers and civilians standing out in the street, they had it blocked off. Luckily one of the officers was able to move out of the way or he probably would have been struck,” said Scott Ruszkowski, South Bend Police Uniform Division Chief.

Police chased after the car in what turned into a high speed pursuit for about a mile and a half.

“Officers turned around and tried to stop the vehicle, vehicle fled from them, from Western to Walnut to the 400 block of Sheridan Street," Ruszkowski added.

The blue SUV ended up crashing and hitting three other cars, one of which was knocked into the front yard of someone's house.

“The vehicle laying upside down, the blue SUV went at a high rate of speed and came through that crash site. Had it not been for the officers actions, it probably would have been a lot worse at that crash site.”

Police were first on the scene when the crash happened and helped break out windows to free the people inside.

“There were two people that got out of the car on their own, two had to be extricated by the fire department and medics. All four were taken to the hospital but all four were conscious, breathing and alert when they left here,” he said.

The Fatal Alcohol and Crash Team were also on the scene early in the morning to determine specific details of the crash. Police said the suspect driving is a male and it is believed that alcohol may have been a factor but that is not confirmed at this time.

The driver that led police on a high speed chase was arrested and is facing five counts.

The names of the people involved have not been released.
Share this article: