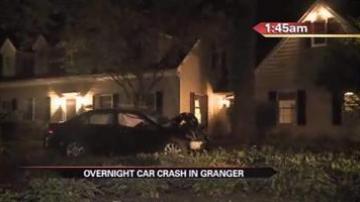 GRANGER, Ind -- A driver is in the hospital after crashing into a Granger family's yard.

It happened around 1:15 a.m. at the intersection of Green Oaks, and Woodburry Way.

Huffman's neighbor said the car hit several garbage cans on his lawn and drove over his garbage can before stopping at the tree. He said police told him the driver was going around 60 mph.

According to the homeowner, the driver smashed into a tree in his front yard.

"If he didn't hit the tree, he would have came right through the side of the house, so we're very fortunate the tree was there" said Huffman.

Witnesses say the driver appeared to be in his early 20's.