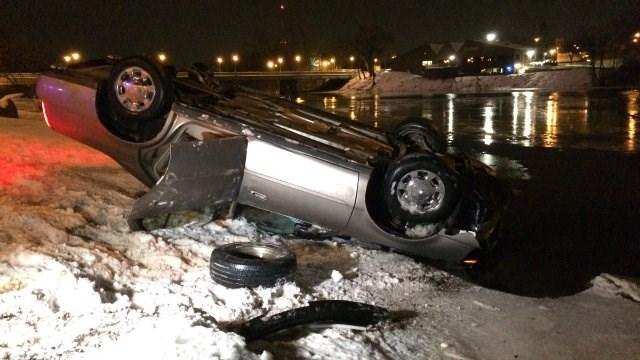 A car drove off the Cooper Bridge and landed upside down on the edge of the St. Joe River Wednesday evening.

Just before 6 p.m., South Bend Police say a silver Cadillac DeVille was traveling west when it crossed the median and drove over the barrier of the bridge, falling over thirty feet.

The car landed with the front end in the water just off Northside Boulevard.

The driver, 65-year-old Robert Forsberg II of South Bend, was extricated from the vehicle through the back doors.

Police say Forsberg was unresponsive when they arrived. He was taken to Memorial Hospital by ambulance where he is in stable condition, recovering from internal and head injuries.

Police say the crash was the result of speed and alcohol and Forsberg will face charges if his blood alcohol test shows he exceeded the legal limit.