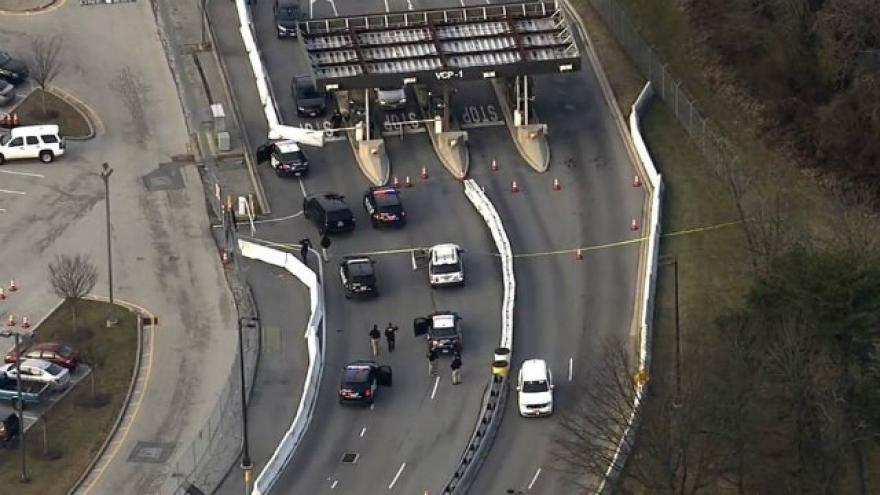 Two people are in police custody and a third in the hospital after a car crashed outside the NSA campus in Fort Meade Wednesday morning. Photo courtesy WMAR

FORT MEADE, Md. (WMAR) -- Two people are in police custody and a third in the hospital after a car crashed outside the NSA campus in Fort Meade Wednesday morning.

During a press conference, the FBI said three men in a black SUV drove onto the campus without permission. The car crashed and shots were fired, but the FBI is unsure who fired the shots. Two of the men in the car were handcuffed and taken into custody; the driver of the car was taken to the hospital.

Two of the men have been released from police custody as of Thursday morning.

Two other people were also injured during the incident. The FBI says an NSA officer and a civilian in the area were also taken to the hospital for non-life threatening injuries that are not attributed to gunfire.

The FBI repeated multiple times during their conference that they do not believe this is an act of terrorism.

"I cannot emphasize enough that we believe that there's no indication that this has a nexus to terrorism nor do we believe that this is anything but an isolated incident of what happened here today," Gordon Johnson, the special agent in charge at the FBI Baltimore office, said.

The White House said that President Donald Trump has been briefed on the shooting. They released the following statement, "Our thoughts and prayers are with everyone that has been affected. We will continue to provide updates as they become available."

The incident came in as a call on Canine Road, which is one of the streets that leads from Route 32 to the NSA campus near Route 295 around 7:15 a.m.

Aerial shots show the black SUV with bullet holes in the front windshield. Johnson says the car may have been a rental. It has New York state license plates.