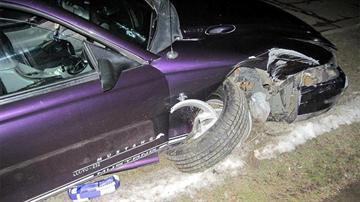 PAW PAW, Mich. – A 33-year-old woman was arrested for operating while intoxicated after her car struck a utility pole and snapped it in half in Paw Paw early Tuesday morning.

According to the Van Buren County Sheriff’s Department, deputies were called to the 100 block of West Michigan Avenue for a single car crash around 1:30 a.m.

A witness told deputies a car struck a utility pole and it appeared the driver was attempting to leave the scene, according to reports.

When deputies arrived, two people were standing outside the vehicle.

The driver, 33-year-old Brandi Espinosa, had a BAC of .223-percent, according to deputies.

She was arrested on a charge of operating while intoxicated second offense.

Espinosa was arraigned Tuesday. Bond was set at $7,500 and a preliminary hearing was set for March 5.