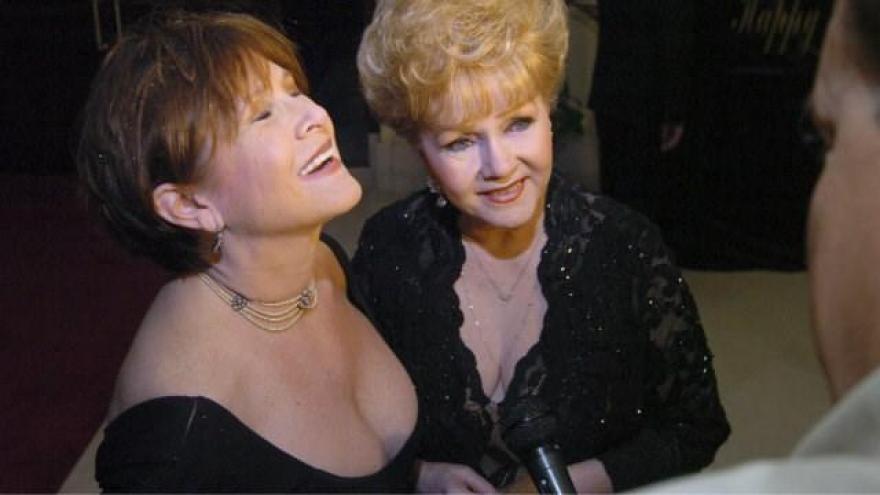 (CNN) -- The lives of Debbie Reynolds and Carrie Fisher continue to be celebrated.

More than a thousand people paid tribute to the mother-daughter duo at a public memorial on Saturday, held near their burial sites at Forest Lawn cemetery in Los Angeles.

The event, organized by Todd Fisher, Reynolds' son and brother of Carrie, befit the Hollywood screen legends with singing, dancing and a cameo by a "Star Wars" character.

Fisher spoke lovingly about his sister and mother, who died in December, then introduced a video featuring movie clips and images of the family through the years.

R2-D2, the lovable robot from the "Star Wars" franchise that launched Carrie to fame, rolled onstage during the service and beeped, seemingly in remorse.

Actor Dan Aykroyd, who was briefly engaged to Carrie in the late 1970s, spoke of their "trusted" friendship.

"We shouldn't be here so soon in our lives," Aykroyd said.

Singer James Blunt, another friend of Carrie's, performed his hit song "You're Beautiful," which Blunt said he wrote in her home.

A group from The Debbie Reynolds Dance Studio performed, as did The Gay Men's Chorus of Los Angeles.

A private memorial was held for Fisher and Reynolds in January, with their joint funeral the following day.

Fisher was 60 when she went into cardiac arrest on December 23 aboard a flight from London to Los Angeles. She died four days later at a hospital. Reynolds died the following day at the age of 84.