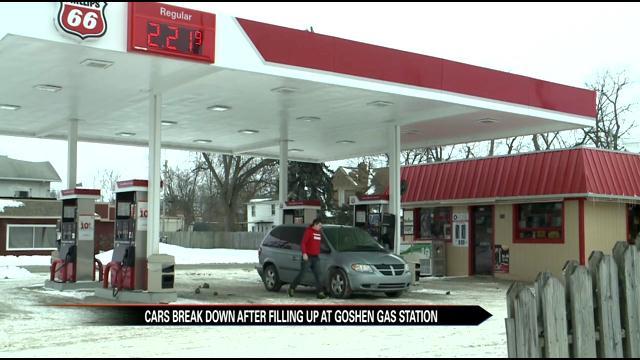 Multiple people filled up their gas tanks during the weekend of February 7th at the Phillips 66 on Main and Pike streets in Goshen. Shortly after the phones at Thompson's towing and repair started to ring says owner Jim Steele.

“There were a number of cars we towed, nine of them from downtown Main Street area to here in Goshen from a gas station and a couple of blocks surrounding area,” says Steele.

Steele says he brought five of those cars to his repair shop where drivers shared similar stories.

“A pickup truck said he was filling the tank with the truck running and the more he filled the worse the tank started to run until he got about 10 gallons in it and it just shut off on him,” says Steele.

Steele pumped the fuel from the tanks of the stalled vehicles.

"We checked a sample of the fuel and we found a majority of the fuel in the tanks were water," said Steele.

On February 12th a report was made to the Goshen police department regarding several vehicles that had been damaged by water tainted fuel.

A manager at the Philips 66 confirmed his gas station fixed the problem with a document collected by the Indiana State Department of Health confirming there is no longer water detected in their fuel supply. Now he is waiting to confirm the reason for the tainted fuel.

And even though the problem is fixed those affected had to pay up.

The manager at Phillips 66 says they are helping out consumers who were affected.

If you ran into any issues after filling up your tank on the weekend of February 7th and have receipts of both the fuel purchase and repair bill you can submit those to the Phillips 66 insurance provider by contacting the gas station.
Share this article: