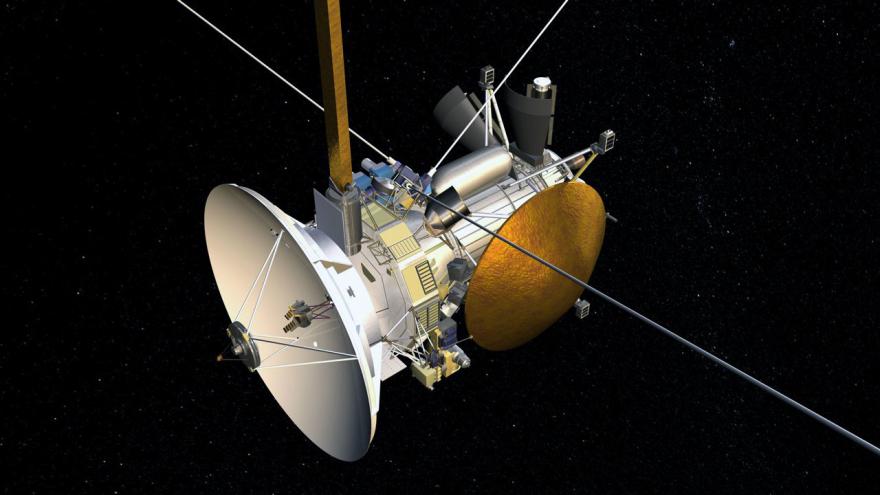 (CNN) -- Contact has been lost with the Cassini spacecraft after it completed a "death dive" into the upper atmosphere of Saturn and transmitted its final signal, according to NASA.

The spacecraft deliberately sank into Saturn's upper atmosphere at a high speed and plunged itself into the planet just after 6:30a.m. ET Friday. Given the amount of time it takes signals to reach Earth, the final signal and last bits of data reached the Deep Space Network's Canberra Station in Australia about an hour and a half later.

NASA confirmed the spacecraft's demise at 7:55 a.m. ET, as predicted.

For about a minute, Cassini was able to transmit new data about the planet's composition as long as its antenna remained pointed toward Earth, with the assist from small thrusters. Then, the spacecraft burned and disintegrated due to the heat and high pressure of the hostile atmosphere. It became part of the planet it set out to explore.

"It was a perfect spacecraft," said Julie Webster, spacecraft operations chief. "Right to the end, it did everything we asked it to. It's perfect, it's perfect."

No spacecraft has ever been so close to Saturn. The last few seconds of the Cassini mission provided the "first taste" of the atmosphere of Saturn, NASA said.

"You can think of Cassini as the first Saturn probe," said Linda Spilker, Cassini project scientist.

On Thursday, Cassini took its last images and transmitted all the data on its recorder to prepare for the final plunge. The final data from Friday is already being processed and analyzed.

For the team behind the mission, losing their spacecraft is bittersweet: Many are sad that the mission is over but excited to see the groundbreaking science provided by unprecedented proximity to Saturn during the final dive.

"The Cassini operations team did an absolutely stellar job guiding the spacecraft to its noble end," said Earl Maize, Cassini project manager. "From designing the trajectory seven years ago, to navigating through the 22 nail-biting plunges between Saturn and its rings, this is a crack shot group of scientists and engineers that scripted a fitting end to a great mission. What a way to go. Truly a blaze of glory."

The team members that have worked together from concept to the final minutes exchanged hugs and tears in Mission Control at NASA's Jet Propulsion Laboratory in California after the loss of signal was confirmed.

"Things never will be quite the same for those of us on the Cassini team now that the spacecraft is no longer flying," Spilker said. "But, we take comfort knowing that every time we look up at Saturn in the night sky, part of Cassini will be there, too."

After launching in 1997, traveling nearly a million miles and reaching the Saturn system in 2004, Cassini spent 13 years exploring the planet and its moons. The data and images led to numerous discoveries that changed how scientists think about our solar system.

"A superb machine in an amazing place doing everything possible to reveal the mysteries and secrets of our solar system," Maize said. "This morning, a lone explorer, a machine made by humankind, finished its mission 900 million miles away. To the very end, the spacecraft did everything we asked. We believe we got every last second of data. We have indeed accomplished everything we set out to do."

Why the dramatic ending?

Cassini had its closest approach with Saturn's moon Titan on Monday, dubbed a "goodbye kiss" by the mission's engineers because it provided the gravity assist that sent the spacecraft on its final encounter with Saturn.

Mission scientists and operators gave Cassini this fiery send-off on purpose. Although many other options were considered -- such as "parking" the spacecraft in orbit -- they didn't want to risk Cassini colliding with any of Saturn's moons.

Cassini data and observations revealed that while seemingly inhospitable to us, the moons Enceladus and Titan could be habitable for some form of life. And NASA didn't want to risk contaminating the moons or any future studies of themwith Earth particles. Although Cassini has been in space for 20 years, microbes from Earth could still exist on the spacecraft without air, water or protection from radiation.

Although the mission itself has ended, the data and observations provided by Cassini will provide new details about the planet, its unique rings and its moons for decades to come.

"Cassini may be gone, but its scientific bounty will keep us occupied for many years," Spilker said. "We've only scratched the surface of what we can learn from the mountain of data it has sent back over its lifetime."

During the final plunge, the Ion and Neutral Mass Spectrometer acted as the "nose" of the spacecraft, directly sampling the composition and structure of the atmosphere -- something that can't be done from orbit, said Hunter Waite, team lead for the spectrometer.

Cassini's grand finale actually began in April, with a series of dives between Saturn's rings, close to the planet and its moons, providing unprecedented insight. This is another reason the mission scientists decided on Cassini's particular end-game: The final dive was a dramatic conclusion to this long and scientifically valuable goodbye.

What Cassini taught us and what's next

Inspired to learn more after flybys of Saturn by NASA's Voyager missions, the Cassini mission was designed to be an international effort that united NASA, the European Space Agency and the Italian Space Agency.

It is known as the Cassini-Huygens mission because it delivered the European agency's Huygens probe to Titan, the "first descent and landing on a world in the outer solar system," according to NASA.

The Cassini mission has been extended twice and finally used up the last of its rocket propellant this week.

Over the years, Cassini has revealed insights about Saturn, its rings and how they operate, the complexities of its moons, the history of the solar system and planet formation and even the other places in our solar system where life might exist: ocean worlds. Cassini has collected more than 450,000 images using a visible light camera.

When Cassini arrived, it witnessed a giant storm circling the planet for nine months. We learned that there are 3-D structures in the rings. Serendipitous observations showed that icy jets erupt from Enceladus. And Titan not only has seas and lakes of liquid ethane and methane, it has an atmosphere of chemicals that rain down, forming a unique chemistry that could lead to life.

"This is the final chapter of an amazing mission, but it's also a new beginning," said Thomas Zurbuchen, associate administrator for NASA's Science Mission Directorate. "Cassini's discovery of ocean worlds at Titan and Enceladus changed everything, shaking our views to the core about surprising places to search for potential life beyond Earth."

And the spacecraft itself, as well as its instruments, are informing future missions like NASA's Europa Clipper mission to explore Jupiter's icy moon, launching in the 2020s.

NASA's New Frontiers competition has called for proposals that include future missions to the Saturn system. The proposals include a Saturn probe that explore the planet deeper than Cassini. Intrigued by Cassini's discoveries, scientists have submitted concepts for future "spacecraft to drift on the methane seas of Titan and fly through the Enceladus plume to collect and analyze samples for signs of biology," according to NASA.

Finalists will be announced at the end of the year, and NASA will explore those mission concepts further.

"For future missions to Saturn, there are a lot of possibilities," Spilker said. "One certainly involves the tiny moon Enceladus and the potential for life in that global ocean. The potential for astrobiology in the ocean on Titan. There's questions about the rings -- can we get even closer and understand those individual ring particles? Lots of questions remain, so that's why we have to go back."